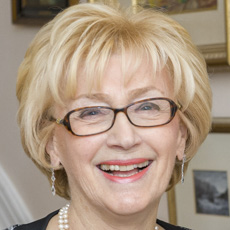 I first got involved with Federation CJA in 1951 when my late father, Dr. George Strean, was chair of the first joint campaign of CJA and UIA. Prior to 1951 there were separate campaigns for our local agencies and for Israel. As a child during the war, I used to hear my late mother Hilda Blumer say she was going to Distillers Seagram - this was where the late Sayde Bronfman organized the Montreal fundraising. I got a kit of canvassing cards at the age of 12, someone trained me, and I have been canvassing every year since then. As a teen I co-chaired the Youth Division with Howie Cohen who has since moved to Toronto; later the Brides Division and finally the Women's Division in 1972.

One of my fondest memories was being able to drive Sylva Zalmanson, a former imprisoned Russian Jew, around Montreal after she was let out of prison. I had worked with the female Council of Presidents of Jewish organizations in Montreal to encourage them to ask their membership to write to imprisoned Soviet Jews. I had begun working with the 35's when the group began at the late Andy Cohen's house when her aunt Elaine Siris came to speak to us. The women at that meeting such as Elaine Dubow went on to become wonderful spokespersons for Soviet Jewry. Memories of dressing up as a prisoner and riding in a truck with Dodo Heppner through the streets of downtown Montreal to raise awareness, and of demonstrating in front of the Soviet Consulate come to mind.

There are many such moments: I recall a particular Shabbat afternoon at the General Assembly of the Council of Jewish Federations annual meeting in Pittsburgh around 1970 when Elie Weisel came to speak to a group of 3000 from around the world. He sang Zolzein Shabbos and you could have heard a pin drop. A few years later in Ben Gurion's library in Tel Aviv I felt deeply watching him shake hands with our eight year old son Eric, asking him to come to live in Israel one day. I was emotionally impacted in 1990 on the tarmac of the Lod airport greeting Soviet Jews during the major exodus. That year Montreal Jewish organizations gave up their fundraising so the dollars could go to the resettlement of Soviet Jews. That made me very proud of our Montreal community as President of Federation/CJA.

Do what you enjoy - there are a multitude of areas within the Federation to use your expertise and heart where you can feel connected. For years I was very anxious making speeches to the extent that the late Joe King (our PR expert) offered to make a tape of my closing campaign speech in 1972. I just stood at the microphone! Shortly after that I returned to university for 6 years to become a psychologist. In the process of giving seminars the anxiety left me and I was able to return to leadership roles without fearing the podium. A bonus of community work is working with amazing talented professionals. Also in travel to foreign countries one gets the opportunity to meet up with people such as the secretary of the Prague Jewish community who, in 1980, was in charge of keeping the Nazi records in the community office. I had the pleasure of hearing Yigal Yadin speak about Massada, and lunching at the Israeli Ambassador to Thailand's home. These are treasured memories.

I believe one of my legacies was in developing volunteer leadership over the years. I think my colleagues felt my admiration and enthusiasm for the organized community. I worked with wonderful men and women who themselves went on to lead the Federation. The greatest legacy, however, are our offspring Eric, Terry and Karen, their partners and our eight grandsons who have all developed a love of and strong connection to Israel.