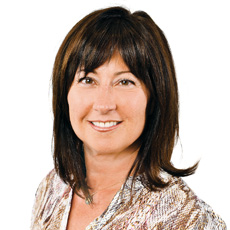 Lucky enough to be born second generation to a family that had had the time and good fortune to become financially secure, I always believed it was my obligation but also my greatest honour to help out those who were less fortunate. I am doubly blessed, to have been able to contribute to my community but also to have found incredibly meaningful and important work that has inspired me and filled my soul.

I first became involved in Federation CJA as a young adult. I chaired the then YAD Gala and the Auction of Treasures for a number of years. I took on the role of YAD Campaign Chair and was then asked to join the Executive of Federation CJA and assumed the role of Co-Chair of Pro Montreal. But my role as a young leader ended as I entered my forties and I had some difficulty finding my place. I Co-Chaired Choices but could not find a home for myself in the Women's Division.

As a young mother, I began to volunteer as a driver for Ometz and would accompany seniors and handicapped adults to their appointments. I really enjoyed connecting in this way and felt I was truly touching those I helped. A project called the Good Food Box was launched citywide and Women's Federation was looking for a way to help out in the distribution centre in the Cummings House and my journey began. I recognized that other women could experience the satisfaction of directly helping a vulnerable individual and at the same time develop an understanding of what their philanthropic dollars were achieving. The seeds of TOV were born. I assumed the Presidency of Women's Federation and with a committed group of fabulous leaders began a process of rebranding and repositioning the organization so that young women like myself could find a place to connect, engage and contribute.

And so, in 2009, we launched Women's Philanthropy and we have never looked back. TOV developed quickly into an incredible outreach and engagement program. We followed by launching the Mosaic Cookbook, a project which engaged over 200 women in exploring the relationship between food and our roles as mothers and nurturers of family and community. We then developed a leadership program for women called Atid to identify women and give them the opportunity to develop the skills they would need to become impassioned leaders of our community. As one team, we now reach out, 12 months a year, with a wide variety of innovative programs to inspire, engage and connect.

In the years since, I have continued to develop programs to engage our community and deepen our sense of Jewish identity and connectivity. First with the Montreal Mega Mission, and currently as Co-Chair of the Centennial, my aim is to share my passion for the wonderful community in which we live and to ensure its future through our engagement. My journey has given my world meaning and has immeasurably enriched my life. I have met incredible people and made lifelong friends and I have learned that we can each make a difference in our world, one person at a time.