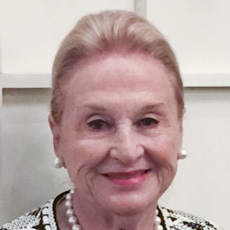 I have an expression, "We are not in this world rent free" – you have to either give your time or give your money. 68 years ago, when I got married, I became involved in the Young Brides’ Division of Women's Campaign and I have been working for Federation CJA ever since! I have received the Rhoda Leopold Award and the Barkoff Award for Young Leadership, for my involvement in canvassing. I co-chaired the General Assembly with my sister, Shirley Goldfarb. I was Women's Campaign Chairman in 1984. I feel my biggest accomplishment was co-chairing the Lion of Judah Division 30 years ago – we started with 61 women and today there are over 570 Lions!

There are many agencies in our community who depend on us, and we need women to educate and raise funds to support them. The future depends on the continuity and well-being of our community.

I am proud to say that, in our family, seven members have chaired the Women's Campaign and General Campaign and my daughter, Cheryl Brownstein, will be number eight!