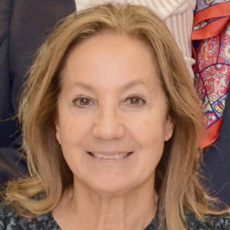 1) How did you get involved in the Federation CJA – and why?

The first time I got involved with the Women’s Federation, it was through a bonds professional from Israel. He put me in contact with the President of the Women’s Federation. It was very touching to meet this wonderful community. I was welcomed with open arms and I got involved immediately at all levels and in different committees, as is still the case. The community is part of my family.

2) What is the fondest memory you have today of your time working with the Federation CJA?

One of my fondest memories is the first leadership mission in Israel. We went to Beer Sheva where we opened the first community centre financed by our community. After that, we headed toward Jerusalem. Having made the trip with my daughter, she and I had the honour of laying flowers at the Holocaust Museum at Mount Herzl. There were other events, such as meeting with a number of leading figures who had an impact on me. It’s impossible to describe all of it.

3) Do you remember a moment or an event in particular that deeply impacted you?

Being among the Lion of Judah donors when we went to Ottawa where we were welcomed to the Parliament by a number of ministers. We had been invited to a lunch with these ministers. Since it was the period of the festival of Sukkot, we had decided to bring lulav branches. Can you imagine all these Lion of Judah donors entering the Canadian Parliament with lulav branches in their hands ? I had the privilege of explaining all the customs and meaning of Sukkot to everyone present at the Parliament.

4 ) What advice would you give to a young woman who wants to follow in your footsteps in the field of philanthropy?

The best advice I’d like to give is to get involved. You’re giving your time, but you’re learning, you’re making friends, you’re helping others. Committing to community life enables us to excel professionally and socially. The community is part of our family and we must nourish it, and the best way to do that is to get involved.

I am proud to be a part of this wonderful community, and even prouder that my children and grandchildren are also a part of it, in addition to being very engaged. It’s a wonderful and very united community with no discrimination, it’s open to all societies living around us. The new generation is increasingly more involved and that makes me very proud. When I look at how my children and grandchildren are progressing, I have no doubt that they will in turn be competent and devoted leaders.