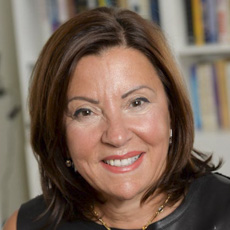 1) How did you get involved in the Federation CJA – and why?

It was more than twenty years ago, when I was very involved with the Saidye Bronfman Centre. I crossed the street and discovered the Federation CJA by chance.

The first meeting I was invited to was led by brilliant, generous Jewish women who were proud of their Jewish identity and motivated to work for the Annual Campaign. They gave their time, showed their generosity, and expressed an immense feeling of solidarity toward their people and the State of Israel.

Over time, I was able to see the excellent work being done by the agencies that make up the Federation CJA.

2) What is the fondest memory you have today of your time working with the Federation CJA?

When I was President of the Sepharade Campaign in 2001 and got to know the Jewish community better. I set my sights on improving relations between the Francophone and Anglophone women in our community in order to strengthen co-operation between the two groups.

In addition, I’ve always maintained that the diversity of Montreal’s Jewish community is what truly gives it its unique identity and strengthens it as a collective identity.

The division impacted me deeply. I was able to face this challenge by acting as a liaison between the two communities. My involvement had a very positive impact on the Federation CJA’s Women’s Philanthropy.

I have wonderful memories of this time. It gave me the opportunity to see that there is an invisible thread connecting all Jewish women.

3) Do you remember a moment or an event in particular that deeply impacted you?

In 2004 I had the opportunity to take part for the first time in the International Lion of Judah Conference in Washington. I shared an unforgettable experience with more than a thousand Jewish women who were all committed to Judaism, their pride and their commitment to Israel. We sang Hatikvah in unison. It was a defining moment for me.

This conference made it possible for me to form an overall image of the work being accomplished by international Jewish federations and the invaluable contribution that women bring to it. It also spotlighted the importance of acting for the sake of our own community and the promise to preserve our heritage in order to strengthen future generations.

4) What advice would you give to a young woman who wants to follow in your footsteps in the field of philanthropy?

When you decide to give yourself to your community, you need to know that whatever the nature of your contribution, it will always be welcomed.

You need to know how to work collectively and have a desire to assert yourself in order to carry out your values… Leave your comfort zone and dare to follow a common path with those who share our vision.

Philanthropy is a spiritual state that has a psychological effect on people. You have to want to make a difference in the life of the less fortunate. You have to keep in mind that there is always someone, somewhere, who needs our help. You aren’t asking for yourself, but for those who aren’t able to.

I want my children, my grandchildren and my family to remember that getting involved in the community is one of the most enriching and extraordinary experiences there is.

I hope to leave them, through my actions and by practicing my life’s philosophy, with Jewish values while bringing to their attention the importance of the community.

A heart to know, eyes to see and ears to hear. It is important to see others in order to do good. Throughout its history, our people have survived thanks to their determination and the pursuit of their primary objective, the Jewish notion of tikkun olam.

Getting involved in philanthropy helps lead to a more human and united society. It’s an obligation that is dear to us. We have the duty to pass on our values to future generations.

Giving to others means changing individually and collectively. Philanthropy gives me a raison d’être in addition to giving meaning to my life.