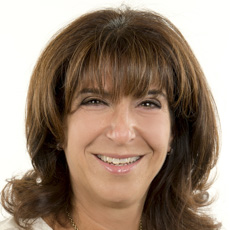 How did I get involved in CJA and why?

It feels like I've been involved in Federation CJA forever, attending events and volunteering on different projects, but I took on my first leadership role in 2006 – a decade ago. When I moved to the West Island in 1991, I first got involved at the Jewish Y, as I was starting my family and that was the logical place to put my efforts, as we used the facility a lot! Then I became involved in the Just for Kids Foundation, as I felt lucky to have healthy children but felt that I should put a lot of effort into making sure the Children's Hospital was a state-of-the-art facility, as I knew I would be using it.

My friend Monica Weinstein, along with Maia Cooper, approached me as I finished my Presidency at the Just for Kids Foundation in 2006, and asked me to join them in their efforts to grow the West Island campaign. I didn't just get to join a committee, I jump in with both feet, hitting the ground running as Vice Chair of the Campaign Committee. My career with Federation CJA as a dedicated volunteer just skyrocketed from there. Since then, I have been Chair of the West Island Campaign. I went on to Chair the West Island, as well; sat on the Board of Directors; sat on the Women’s Philanthropy Executive as both representative of the West Island and currently as Chair of the Pomegranate Society. I also sit on the Israel and Overseas Committee and on the Allocations and Community Relations Committee. I am so grateful to be able to give back to a community that has always been there for me and that has embraced me and made me feel a part of something greater than us all.

What is your fondest memory to date of your time working with Federation CJA?

There are so many memories in my decade of involvement. They range from the memory of the phone call I received from Evan Feldman as I stood in line at the cash at IGA, telling me that I was given the honor of being the recipient of the Distinguished Leadership Award in 2015, to simple moments like sitting with Maia and putting the finishing touches on a proposal that we were presenting to the Board of Directors of Federation CJA and thinking, Wow – look what we've accomplished and where we are today!

Can you recall a particular moment or event that impacted you profoundly?

The Women’s Philanthropy Choices event is by far my favorite event to attend. I feel amazed at the overwhelming feelings I have after each and every year. The collective power of the number of women who come together, and the power of the words that are spoken by the speakers always move me. I always rejoice at being part of this strong and powerful group, who accomplish so much together.

I have now travelled to Israel a number of times with Federation CJA. I have been to Beer Sheva four times and spent a week there on my last visit. Every visit takes me by surprise. I marvel at the progress and growth of the city from one year to the next. I also marvel at the effect our dollars have in supporting this ever-growing city. I love driving through Beer Sheva and spotting one of the many Federation CJA logos on various buildings!

I am always overwhelmed when someone comes to thank me for what I do in the community. More often than not, I feel that I have gotten more out of my experience than what I have actually given. Volunteering, helping others, making that difference in the life of someone you may know or may not know is one of the most fulfilling things you can do for yourself. Do not volunteer expecting to get a thank you or to get gratitude. Fulfillment comes from within when you do good unto others.

What advice would you give to the young women following in your philanthropic footsteps?

Follow your passions. Pick and choose where you put your efforts carefully. Every idea is wonderful and terrific and worthwhile but I try to choose areas where I feel I can make a difference.

There is a quote in Pirke Avot that I like to live by – "It is not what one says, but rather what one does, that makes the difference in the world." I consider that my legacy will be that I was a leader who led by example. I would never ask anyone to do work that I would not do myself. I like to think that I was an influencer, someone who was able to bring people around the table to help better the Jewish Community. I feel that over the last decade I have made a lasting difference in the West Island Community, especially. I have been a part of many changes in this specific community and I am so proud of where we are today. I hope that I had a significant role in those positive changes. My children’s involvement in this community is also part of my legacy. I am so proud that all three have taken on leadership roles. It gives me the greatest pleasure to sit at a community event with them as a partner, not just as a participant.