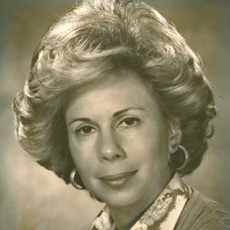 (A tribute by Phyllis Waxman, then VP of the AJCS)

We bow our heads in memory of Irma Polisuk, whose unbelievable and magnificent courage is a living testament to her memory – for she gave the last year of her young life, knowingly, to her Jewish community.

Her quiet determination and deep sense of responsibility imbued her with an almost superhuman strength to carry on as the 1975 Women’s Division Chairman and the full reflection of her leadership was mirrored in the quality of the people she inspired.

Only her father, husband and sons knew the seriousness of her recurring illness, her pain and her extreme discomfort from treatments during the past year. They gave Irma her unwavering and staunch support, love and devotion in her wish to carry on, and together they gained so much in helping her to carry out the decision they made together.

Not one of us knew or understood the passion of her commitment nor did we realize, at that time, that her contentment, satisfaction and happiness came from giving of herself to help others.

Irma Polisuk gave us an unforgettable year – so much more meaningful for us now, if that is at all possible.

She earned the respect, the admiration and the heartfelt gratitude of an entire community and we are humbly grateful that the opportunity was given to us to make it known to her.

“Our solidarity with Israel means we must help Jews everywhere – there are poor people to help here and in Israel, there are immigrants to be absorbed in a new life here and in Israel; there are sick and deprived people here and in Israel. What matters is that we have both the responsibility and the opportunity to help them. If we don’t take up the challenge at home and abroad, we will be short-changing not only Israel but ourselves. As the prophet Jeremiah said – “There is no redemption for the people of Israel until We Are One.”