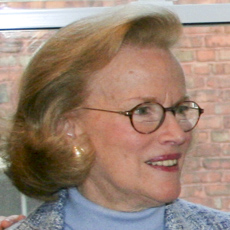 I believe Joanie got involved in the Federation of Jewish Communal Philanthropies when Don Hurwitz came to Montreal from Philadelphia as Executive Director and thought it would be a good idea to have a Youth Division for the campaign. Joanie and Jack Rabinovitch were the first co-chairs.

She then went on to work in several communal activities like the Hadassah Art Auction, and was President of the Auxiliary of the Jewish General Hospital (JGH).

I believe her greatest legacy from that JGH job was the Hospital Opportunities Program (HOPS) which she brought to the hospital. It was, and still is, a wonderful opportunity for young people who want to see if a medical career would interest them. It is a very prestigious and sought after program and I think she would be so pleased to know that!

She was impacted emotionally when she and Lester Lazarus went to Soviet Russia during that difficult period in the 1990's when Jews could not practice their religion at all. She and Lester sewed names and addresses into their coats and brought salamis, matzah and other good things, and made Seders in tiny apartments so they could celebrate together with the refuseniks.

Joan was very involved in the original twinning of our Montreal community and Beer Sheva, and developed close personal relationships with that community over many years.

I know she fully enjoyed her volunteer work at CJA, and I believe that those she worked with would have been inspired by her kindness, generosity of spirit and good humour to become leaders as well.