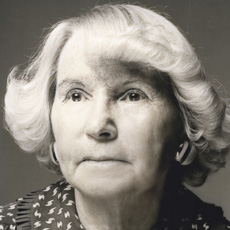 (As told by her daughter, Virginia Yaffe)

My mother was born in a small farm town outside of Kiev, in the Ukraine, in 1912. Her father was a blacksmith and her mother took care of the many children, including the eight or so from the wife that preceded her (that woman died) and her own two children – my mother and a younger girl. The pogroms were beginning to attack the Jews of the Ukraine, and when my mother was about 4 or 5 (I don't know her exact age at this time) a group of White Russians came riding to their farm. The family – father, mother and older children – were lined up and shot. My mother and her little sister hid under some hay in their barn and the soldiers left without finding them.

The two little girls wandered around for an undetermined amount of time until a representative of Jewish Immigrant Aid Services (JIAS) found them, dirty, hungry and miserable. He arranged for my mother to be brought to Montreal, and her sister to be taken to Argentina. It is a mystery to all why the sisters were separated. My mother was brought here where she was adopted by that man. It seems as if he really did not want a child but tried to be an example for the people he wanted to adopt the other children he found in similar situations. His wife wanted nothing to do with my mother.

She was given a good education in Montreal, both Jewish and otherwise, but certainly no love. As soon as she was able, she left that home and worked until she could attend McGill, graduating with a BA and then a Masters in Social Work, being one of the first, if not the first, Jewish women to obtain that degree.

After my mother received her degree in social work, she worked at the Jewish orphanage in Montreal (I don't know its official name). She did not accept the status quo there and was a champion for those children, demanding better food, better education, etc. The good news is that it was there that she met my father. Although she stood at barely five feet tall, I am told that those in charge were intimidated by her refusal to accept that "good enough was good enough."

She clearly realized that her life had been saved by an adjunct organization of Federation CJA. When she was married and in a more stable position, both financially and personally, she was determined to give back. She became involved in Federation CJA at that point, especially in adding new organizations to the roster of those already being helped. She wanted to help everyone.

My mother was not shy to ask the tough questions and I am told that when she approached the microphone at a meeting, the group quivered as they knew she would raise something difficult. She had no interest in wealth, social status, or anything beyond helping others, as she had been helped. Her motives were exceptionally pure.

Surely the incident that impacted her entire life most profoundly was the murder of her nuclear family. In Montreal, she married and had three children. Her husband, my father, died at an extremely early age, leaving her with three small children. Shortly after, her son, my brother, became ill and subsequently died of leukemia. In spite of these tragedies, she remained (mostly) upbeat and interested in those around her.