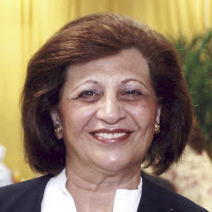 My marriage to Irwin took me away from my involvement in israel's social and political life. As my credo always was "אל תפרוש מהציבור, ( do not set yourself apart from your community ) it was quit obvious for me that I would get involved with my new community.

The main issues I was always engaged in were Jewish education , Jewish identity and the centrality of Israel.
Naturally, my first introduction to Montreal's Jewish community was the Federation building . The two organizations I
joined , before any other, were The Jewish Education Center - working with the young and young adults on issues of Jewish education and identity;
and The Canada Israel committee , QIC, and subsequently CIJA- to work towards enhancing the issues of Israel advocacy and Israel - diaspora relations.
Over the years - the focus of my teaching and lecturing were these topics . I taught and spoke in as many programs as I could , to as many groups as I was asked.

This agenda brought about my becoming the first chair of the ״Israel Experience Center " involved in creating a program called "Am Echad ", that ,in my view , was at the cradle of the development of Birthright , as well as being there at the initial stages of MOL.
My work with university students , a task I loved and cherished always ,eventually put me in the seat of Hillel president . Those were the most difficult years of the second intifada, as well as the beginning of the Israel - apartheid weeks on campuses, putting our students at the forefront of the
struggle for Israel.

Two of my most rewarding experiences were to have been the founding co - chair of the committee for "The Commemoration For Israel's Fallen Soldiers", which made Montreal's Jewish community one of the first communities in Canada to have this day as part of it's annual community calendar since 1988.
I also was among those who pushed to start the tradition of celebrating Yom Ha'Azmaut
Israel Independence Day ,
In a community wide Rally in downtown Montreal, since 2002.
I must admit, that these undertakings were not easy to accomplish at the outset. But despite the difficulties - I consider my work towards them amongst my proudest moments .
There always was, and still is , a covenant between Israel and the Jewish world - a tie that cannot be broken : as Jews we are responsible for Israeli safety and security , and in return - Israel's survival is the guarantor for the wellbeing of Jews everywhere . This fundamental belief was at the core my motivation for everything I have done.
Unfortunately, I see commitment to keep this covenant weakening among some of the younger generation. My deep hope is that our future women leaders will work to reenergize it.

It was the merit of the righteous Jewish women that led the Jewish People out of Egypt . I believe in the power of women.
I put my trust in our young - Jewish Women leaders - to carry that torch into the future.