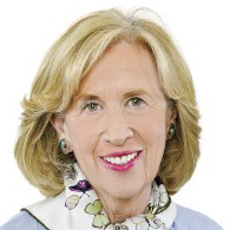 (as told by her children)

For Roz z”l, leading by example was a way of life, and one that had been a guiding principle since the age of 17 when her foray into community service first began. From that early involvement at Hillel, while studying at her alma mater McGill, to serving a wide array of communal institutions in Montreal, she stood out as an undeniable leader in Montreal—and beyond.

The dedication and professionalism with which Rosalind tackled each mandate made her a catalyst for progress and an inspiration to many. She served on no less than five boards of directors including, among others, Canadian Friends of Hebrew University, Canadian Friends of Tel Aviv University, National Women’s Philanthropy, and the Allegra Chamber Music Group.

She chaired numerous committees including: the Women’s Philanthropy Campaign at Federation CJA; the State of Israel Bonds, Women’s Division; UIA Federation’s Canada National Women’s Division; the first Mazon Food Fest to feed the hungry, which she also founded some two decades ago; the United Jewish Communities (UJC) International General Assembly, attended by thousands of delegates; the Canadian Friends of the Israel Museum in Montreal; as well as countless galas and events.

Rosalind’s impact on our community is as diverse as it is far-reaching from her role as a driving force behind important local exhibits of the Dead Sea Scrolls and Israeli photography, to leading missions to Israel on behalf of Federation CJA and the Shaar Hashomayim, to raising awareness of cancer research and treatment as part of the Goodman Cancer Research Centre’s Public Lecture Series and the Dr. Marla Shapiro Public Forum.

Within Federation CJA, she will be remembered, in part, for her work in bringing the Lion of Judah Society to Montreal and for organizing the Montreal GA.

It comes as no surprise that Rosalind had been honoured for her work in the past, and was the recipient of awards from the State of Israel Bonds, the Jewish Public Library, and Mazon Canada.  She was bestowed the Mildred B. Lande Award and also received the Samuel Bronfman medal.

As co-founder with her husband, Morris, of the Morris & Rosalind Goodman Family Foundation which supports and strengthens hundreds of charitable organizations across Canada, Rosalind’s passion to make a difference was an inspiration to new generations of volunteers and professionals.

Roz placed a great deal of importance on the act of being involved, and was less concerned with the role she played or title she held.  She liked being around, and working with people with whom she had a shared sense of mission.