Federation CJA Women's Philanthropy®, a sisterhood of women united by acts of kindness and generosity dedicated to ensuring the continuity and vitality of our Jewish community.

Our Mission: Women’s Philanthropy inspires and engages women over 40 to mobilize resources and strengthen the Jewish community.

Our Vision: A strong and vibrant community for future generations.

Our Values: Jewish women taking responsibility for each other according to the principles of Chesed (caring and compassion), Torah (Jewish learning), Tikun Olam (repairing the world) and Tzedakah (social justice). 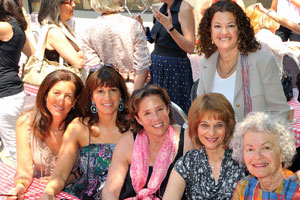 The Lion of Judah is an internationally recognized designation for women who personally contribute a minimum of $5,000 to the Combined Jewish Appeal annual campaign. The Lion of Judah recognizes and honours philanthropic women in Montreal and worldwide.

First introduced in Miami Women’s Division Campaign in 1972, the Lion of Judah pin was established as a representation of a woman’s commitment to the worldwide Jewish community. Upon its humble beginnings, only sixteen women qualified. Since then, the Lion’s roar has become louder and louder as more than 13,000 women around the globe now proudly call themselves Lions of Judah.

As a symbol of strength and majesty in the Jewish world, the Lion of Judah is a reminder that each woman can make a significant contribution at home, in Israel and anywhere in the world where Jews are in distress.

The Lion of Judah is also a symbol of unity – each woman who wears her pin is uniquely connected to all other Lions of Judah, all of whom embody the true meaning of tzedakah. These women have the determination, capability, and power to take the dream of Tikun Olam and turn it into a reality.

Montreal women have formed a community of international trailblazers with an astounding 575 Lions, and our numbers are on the rise. As a woman’s contribution grows, she is recognized for her philanthropy with a corresponding precious gem that is placed in the pin.

The following are the different annual Lion of Judah Giving Levels:

The Pomegranate Society is an internationally recognized designation for women who personally contribute between $1,800 - $4,999 to the Combined Jewish Appeal annual campaign.

Today’s women are interested in taking a hands-on approach to philanthropy. The Pomegranate Society recognizes this and, beyond raising money, we serve as the catalyst for women to perform mitzvoth. Federation CJA Montreal is the first Canadian Federation to introduce this international recognition society. The significance of the pomegranate is that it has 613 seeds and there are 613 mitzvot listed in the Torah.

It is really exciting for women to engage in projects that make our community better. Among other activities, members of the Pomegranate Society have volunteered at Le Café, where they served meals to families that are experiencing a difficult time. They have participated in Missions to Montreal, where they visited the agencies funded by Combined Jewish Appeal and learned about the scope of the challenges facing our community, and the great work done to help people cope.

Women’s Philanthropy Mosaic is a unique cookbook of over 100 delicious and innovative recipes that reflects the rich diversity of Montreal’s Jewish cuisine. A project of Federation CJA’s Women’s Philanthropy Division, all proceeds from this book will be used to support women in need.

Download your Mosaic app at the App Store and get a handy ingredients list for each recipe.

RECIPE OF THE MONTH

The Mosaic Cookbook is also available at the following locations:

Upcoming Events
View All Events
Submit your Event
Shabbat Candlelight
January 28  4:37PM
This calendar is provided as a public information service. Federation CJA does not endorse the content of non-Federation CJA events listed in this calendar.