Photo: Courtesy of the City of Côte Saint-Luc (Darryl Levine) 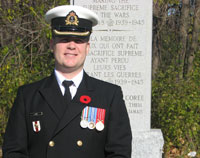 Photo: Courtesy of the City of Côte Saint-Luc (Darryl Levine)

So said perhaps the most famous soldier in Jewish history, whose exploits are celebrated with Chanukah, the festival of lights. While none seek out war, it is sometimes necessary in response to evil. The Jewish community has answered the call when Canada has gone to war or sent peacekeepers abroad.

As Joe King notes in his history of Montreal’s Jewish community, “The Jews of Montreal have a long and often distinguished record of fighting on behalf of Canada.” This comment holds true for Jews across Canada. In World War II, for example, 9.6% of Canadian Jews served in Canada’s Armed Forces – a rate 10% higher than the national average.

An RCMP report of December 1940 pointed out, “The Jewish community as such has subscribed generously, away out of proportion, not because they consider it a ‘Jewish’ war, but because they understand the clear cut policy of decency versus brute force much better than people who take their freedom for granted.”

Moreover, Jews served with distinction in World War I, Korea, on peacekeeping missions, and – currently – in Afghanistan.

Federation CJA pays tribute to Jewish veterans with a prominent memorial at its Cummings Square headquarters.

To pay tribute to Jewish Canadians who were killed in action, Canadian Jewish Casualties in the Canadian Armed forces provides a comprehensive archive of Jews who made the ultimate sacrifice for their country.