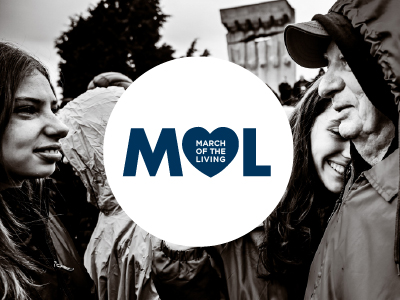 About March of the Living

The Montreal March of the Living is run through Canada Israel Experience, which also oversees the national Young Adult and Adult trips. Over 700 participants from a variety of religious and educational backgrounds from all across Canada participate annually on the March of the Living.

The International March of the Living brings together Jewish youth from Israel, United States, Mexico, France, Great Britain, South Africa, Australia, South America, Eastern Europe, Russia, Hungary and Romania.
The program will include visits to a number of Polish cities, towns and villages that were once vibrant centers of Jewish life and learning. You will also visit the concentration camps and death camps such as Auschwitz-Birkenau, Plaszow, Majdanek, Treblinka where much of European Jewry was annihilated. You will witness hearing first-hand stories from our beloved survivors in the places they survived. Your experience in Poland will be marked by special observances including joining thousands of international youth on the International March of the Living on Yom Ha’Shoah, Holocaust Remembrance Day – you will march from Auschwitz to Birkenau on the same path Holocaust victims marched over 75 years ago.
The itinerary in Poland is busy and includes very little down time. The days are full and begin early until late at night. There is a significant amount of driving in order to see as many sites as possible. In general, the trip overnights in hotels in Warsaw and Krakow.
The trip continues to Israel where the pace of the trip becomes a little more relaxed. You will visit a number of exciting places and ancient sites. On Yom Ha'Zikaron – Israel's Remembrance Day – students will take part in ceremonies honouring Israel's soldiers who gave their lives in defense of their country. The next evening, Yom Ha'Aztmaut – Israel's Independence Day, will include a celebration in honor of the establishment of the State of Israel. The following day is the International March of the Living Yom Ha’atzmaut celebration with thousands of participants. In general, the trip overnights in Jerusalem and in northern Israel.
During your stay in Israel you will take part in many special events organized specifically for the participants of the March of the Living. Your visit to Poland and Israel will be a study in contrasts. In Poland you will search for traces of a world that is no more. Like many others, you may leave wondering how it was possible for the destruction of almost an entire generation of Jews to occur – but you will pledge to yourself to keep their memory alive. In Israel you will encounter a country that is striving valiantly to keep the age-old flame of Jewish nationhood alive. The Holocaust is a stark reminder of the anguish of our past – but Israel represents the hope of our future. This experience will show you how important both aspects are to your identity as young Jewish people.

The Pledge of the March

View All Events
Submit your Event
Shabbat Candlelight
July 30  8:06PM
This calendar is provided as a public information service. Federation CJA does not endorse the content of non-Federation CJA events listed in this calendar.