Roundtable with the Minister of Public Safety and Emergency Preparedness, the Hon. Bill Blair 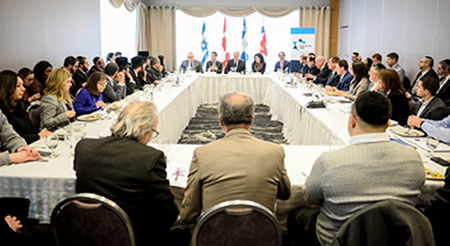 Statistics Canada data has repeatedly shown that Jews continue to be the group most targeted by hate crimes, with an incident occurring once every 24 hours. In 2018-19, the SIP program provided $652,685 in funding for security infrastructure for 14 Montreal Jewish institutions. Community leaders seized the opportunity to applaud the government for its recent expansion of the program, while urging Minister Blair to consider increasing SIP funding once again and to support other initiatives, including Federation CJA’s Community Security Network, which represents 34 institutions across the city; as well as bolstering police hate crimes units.

In his remarks, Minister Blair was receptive to examining the possibility of increased funding and pledged to continue working with CIJA and Jewish federations across the country to address the issue of rising antisemitism and quell fears within the Jewish community.

“Federation CJA is proud to be spearheading efforts to elevate the level of security consciousness and preparedness at our schools, synagogues and institutions through the Community Security Network. By working together as a network, we are able to share information better and faster, keeping security at the forefront of all decision-making. We are grateful to Minister Blair for recognizing and supporting Federation CJA’s proactive approach and for taking the concerns of the Jewish community so seriously”, said Joel Segal.