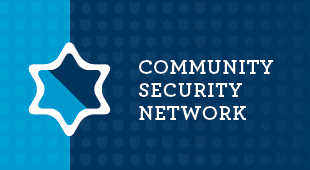 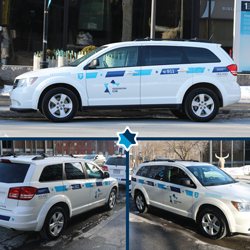 Jacques Bisson and David Zarfati, Federation CJA's Director and Assistant Director of Security respectively, are working hard behind the scenes every day to ensure that every member of our community is able to live their life freely, safely and proudly as a Jew.

As the central organizing body for the Montreal Jewish community, Federation CJA has always been concerned with community safety, but our role has significantly expanded in recent years with the increase of antisemitic incidents and violent hate crimes worldwide, even close to home. Last year, we spearheaded the creation of the Community Security Network (CSN) – an initiative to strengthen and streamline security protocols and infrastructure for local Jewish schools, synagogues, agencies and institutions. This collaborative, preventive approach ensures that security stays at the forefront of each organization’s decision-making.

Our efforts have been successful because of the unique partnership between Jacques and David, whose complementary backgrounds and expertise provide a local and international perspective on today's best security practices. Jacques is our liaison with the Montreal police and oversees all community security, throughout the Province of Québec. David is often on the road, visiting the CSN's 44 buildings to implement infrastructure upgrades and security trainings.

Jacques was born and raised in Montreal North. His police officer father inspired him to join the force himself right out of college, and he spent 29 years with the SPVM, working his way up to the position of police commander. While he officially retired in 2015, he only made it two weeks off the job before joining the security team at Federation CJA. Among many other contributions, he has been instrumental in developing communication and trust between the Jewish community and local law enforcement.

Prior to this role, Jacques had very little opportunity to have much interaction with the Jewish community. “I was astonished to see how the community is structured to help people at each and every stage: young entrepreneurs, school kids, the elderly, Holocaust survivors…”, Bisson says. “If everybody worked like this, the world would be a better place.”

David is originally from Haifa. After completing his mandatory IDF service, he spent 10 years working as an Israeli intelligence officer before coming to Montreal in 2017 to be the head of security at the Israeli Consulate. He joined Federation CJA's security team last year.

Although David has only been in Montreal a short time, it has already become a second home. He and his young family always have multiple invitations to Shabbat dinners, and if they need a doctor, or a lawyer, or anything for the baby, he knows that someone will be there to help right away. "Through my work, I have had the opportunity to travel all over the world, and I can tell you that Montreal's Jewish community is very special", Zarfati says. "It is an honour to be able to work every day to protect it."

Whether you go to synagogue regularly, work out at the Sylvan Adams YM-YWHA, or use any of the services provided by Ometz or the Cummings Centre, Jacques and David's vigilance touches every aspect of Jewish life. We are grateful to have this dynamic team protecting the Montreal Jewish community, and also empowering us to be proactive about our own safety.

Remember that the most important rule is, if you see something, say something. In case of emergency, please immediately call 9-1-1, and also report all incidents to our hotline at 514-343-4343.

Upcoming Events
View All Events
Submit your Event
Shabbat Candlelight
January 28  4:37PM
This calendar is provided as a public information service. Federation CJA does not endorse the content of non-Federation CJA events listed in this calendar.