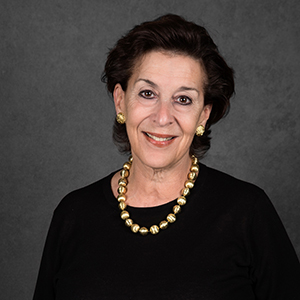 For over 25 years, Sarah Rubin has played an important role in the Montreal Jewish community. She says her motivation comes from her genetic makeup: her parents and grandparents were committed community workers who instilled in her the privilege and duty of helping the less fortunate. She plays an active role in the annual Combined Jewish Appeal Campaign, and is currently a member of the Women's Philanthropy Advisory Board, the Lion of Judah Executive Committee, and the Jewish Federations of North America Board of Trustees. She has been a board member of the National Women's Philanthropy of North America since 2011, served as Chair of Federation CJA's Women's Philanthropy Campaign in 2006, and has been part of the Women's Division Committee (now Women's Philanthropy) since 1991. She has been active on the boards of the Bronfman Jewish Education Centre and Canadian Associates of Ben Gurion University. She is President of B’nai Brith Hillel Foundation of Montreal and sits on JGH’s Users Committee, and the board of the Jewish General Hospital Foundation. She is a proud recipient of the Gordon Schwartz Memorial Award, the Rhoda Leopold Award for "Woman of the Year,” and Federation CJA’s 2013 Distinguished Leadership Award. Sarah is married to Allen, also a dedicated volunteer, and has two daughters and one grandchild.

"We must pass on the attributes of tzedakah and tikun olam to the next generations."