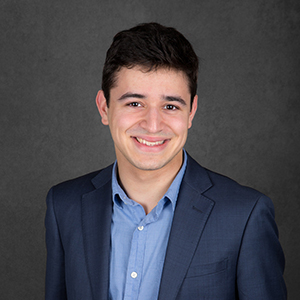 Jonathan Glustein has been a tireless fighter of anti-Semitism at McGill University, leading campaigns against the BDS movement and countering various anti-Semitic instances that occurred over the past three years. Jonathan first served on the Vote No Committee that defeated the BDS online ratification in 2016. He then served on the Students’ Society of McGill University (SSMU) Board of Directors for the 2016-17 year, where he oversaw the affairs of the Society, including the vote of the Board upholding the Judicial Board’s resolution that found BDS unconstitutional. Jonathan founded the SSMU Special Committee on Anti-Semitism, which developed a definition of anti-Semitism that is now codified in SSMU’s Equity Policy. The Committee also developed a report on fostering inclusive dialogue on Zionism and Jewish issues at McGill. Further, Jonathan represented the Directors who were voted off the Board at the 2017 General Assembly to the Judicial Board and secured a unanimous ruling reinstating them for service. Jonathan has been a liaison between the McGill Jewish community and the wider Montreal community, and has managed a large group of volunteers yearly. He is proud to be an advocate for the Jewish community at McGill and is grateful for the Jon Roskies Award.

"I want to ensure that the McGill Jewish community stands up in the face of hate and that McGill remains a place where Jewish students feel welcome and proud."